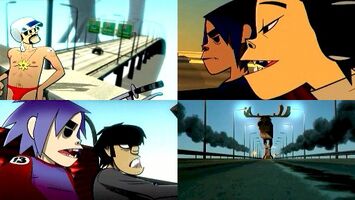 The video opens with the Gorillaz all boarding the Geep, as the word "Gorillaz" is painted onto the background. Murdoc turns the key to start it, and the song begins playing on the radio. He starts off driving, as the song cuts and no longer comes from the radio. Murdoc drives onto and begins to follow a raised road. They do various stunts such as a loop-the-loop and a big jump as 2-D sings along and snaps his fingers. Noodle, voiced by Miho Hatori, sings back-up as Russel Hobbs stares ahead blankly, obviously unenthused. Murdoc intentionally misses the exit marked 'Salvation' and pushes onwards past STOP markings on the road, causing a spacecraft to emerge from behind the church in the distance and chase them down, blowing up a gas station along the way. As the Geep avoids debris (namely flaming tires) from the explosion, they come face-to-face with a giant moose. Murdoc activates a secret mode of the Geep and fires two missiles at the moose, but it sneezes before the missiles hit it. The force is strong enough to make the missiles come hurtling back to earth on top of the Geep. The last shot is one of the Gorillaz looking worse for wear.