The storyboard for the canceled music video of "5/4".

The music video opens up with a full naked female, but her breasts are covered with stars and genitals covered with the Gorillaz logo. The scene changes, to show Noodle playing the guitar. The scene zooms out, showing the whole Gorillaz team performing on a tall stage. Murdoc sees a group of hot babes, and starts to move towards them on a platform. He then takes off all his clothes. Murdoc then attempts to jump towards the group of females, but doesn't make it and falls to the crowd. 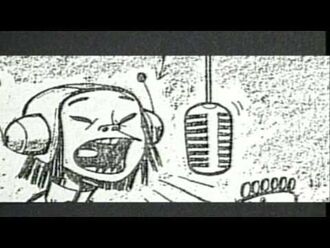