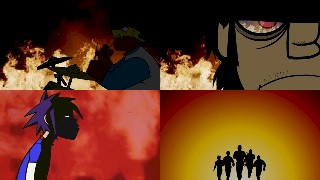 Unknown. Probably made by Matt Watkins and Tim Watkins, the members of Zombie Flesh Eaters.

Gorillaz are seen playing while fire burns all around them. D-12 run into the scene from a distance.

This clip is short, around a minute long. All of Gorillaz' appearances are cut in from previous videos ("Clint Eastwood", "19-2000", "Tomorrow Comes Today"). This clip appeared on the Gorillaz website around the time the track 911 was released for download. The backing soundtrack is part of the 911 song.

Retrieved from "https://gorillaz.fandom.com/wiki/911_(Video)?oldid=41831"
Community content is available under CC-BY-SA unless otherwise noted.