Cortez is Murdoc's raven. They met while Murdoc was in jail down in Mexico, but a raven with a very similar experience can be seen on Murdoc's stroller from when he was a child, which may indicate an earlier acquaintance of the two. Cortez can be heard in the track "O Green World" “belching all over the microphone” as Murdoc puts it in “Rise of the Ogre”. Cortez has jet black feathers with bright red eyes. Murdoc often feeds him eyeballs, as depicted in the picture to the right. During Phase 2, on the Kong Studios website Cortez could be seen in the intro to the website, then in Murdoc’s Winnebago. Until he was last seen screaming in 2006 after the windmill left Kong after the El Mañana Video.

In Phase 5, Cortez was implied to be dead, after Murdoc apparently accidentally cooked him, stating when asked about him over messenger: "Cortez, best pal I had in the world. Important life lesson: don't try and cook a roast dinner after absinthe night." However it was revealed during Phase 6 in the Gorillaz Almanac that Cortez escaped the oven while Murdoc wasn't looking and now works at the Tower of London.

He is shown as a statue in "DoYaThing". He also appears as a statue on the Gorillaz iOS/Android app. He is also likely the raven in the On The Island G-Bite. 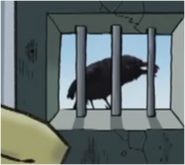 Cortez in Murdoc's ident of the upcoming Gorillaz video. 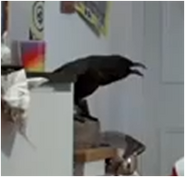 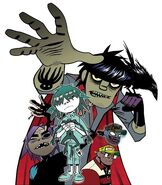