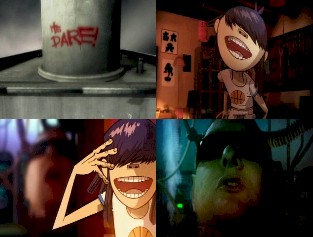 DARE is a single from the Gorillaz album "Demon Days".

The video opens with a rotating shot of Kong Studios before panning downward on the word DARE spray-painted on one of the towers. The shot transitions to a view of Noodle sliding open a set of Shōji doors to reveal the disembodied head of Shaun Ryder, hooked up to an elaborate array of machinery within her closet.

Noodle then flips a series of switches and watches as her entire room begins to light up with music, dance lights (complete with a disco ball), and Shaun's head coming to life. The two then engage in a duet with Noodle singing lead and Shaun as her backup.

As the music continues to play, it becomes apparent that the music coming from Noodle's room is becoming obnoxiously loud, so much that Russel can hear it from the bathroom stalls on the lower floor of the studio. The camera moves up through the ceiling of the bathroom, into Noodle's room where Shaun's head is still singing, and then up to the room above, where 2-D is pressing his head against the floor trying to listen to the commotion.

The song progresses, the yelling of restless people throughout the studio begins to rise, prompting Noodle to shut the doors of her closet, putting Shaun back to sleep. The scene is abruptly cut by a distressed Shaun waking up in his bed in his flat only to be comforted by Murdoc who proceeds to tell him, "Go back to sleep, honey"; revealing that they are sleeping together (implied romantically.) This sequence is then also interrupted by (this time) a distressed Murdoc waking up inside of his Winnebago in a cold sweat; hinting that one or both of the sequences was a dream.

Noodle looks at her experiment.

You Just Think It!

Russel on the toilet.

2-D listening through the floor boards.

Mike the Monkey seen while fading.

Murdoc in bed with Shaun

Murdoc gasping and panting after his nightmare. 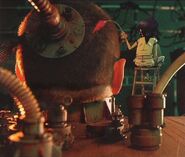 Add a photo to this gallery

Retrieved from "https://gorillaz.fandom.com/wiki/DARE_(Video)?oldid=41808"
Community content is available under CC-BY-SA unless otherwise noted.