I want to be a better person in every aspect. I really don't feel I've in anyway fulfilled my potential in every area of my life. But I'm optimistic.

Damon Albarn (born March 23, 1968, in Whitechapel, London, England) is an English singer and songwriter who gained fame as the lead singer of rock band Blur, though as of late, Albarn has been more active as a member of Gorillaz and as a solo artist. Recently, he also has released an album with Blur called "The Magic Whip", and a solo album called "Everyday Robots".

Albarn's early life was spent living in Leytonstone with his parents Hazel and Keith and his sister Jessica. His family then lived in Turkey for a few months. When he turned ten, his family moved to Colchester, Essex, England due to the needs of his father's teaching career. Albarn then attended Stanway Comprehensive School. He met future Blur guitarist Graham Coxon at school and found they both liked similar bands, such as the Jam, the Kinks, and the Human League.

After finishing secondary school, Albarn moved to London to attend the East 15 Acting School, losing contact with Coxon. He concluded after one year's stay that he was a terrible actor and instead took up writing and performing music. Some of the songs he wrote in his early recording days later became Blur songs, such as "Birthday" on their debut album, Leisure. At the age of fifteen, he won an award for "Young Composer of the Year".

In 1988, Albarn enrolled at Goldsmiths College in New Cross, London, England; he took a part-time course which he claims he did "just to get on campus". There, he met up with Coxon once more. After recording a number of demo tapes together, the two formed "the Circus," at which point Coxon introduced Albarn to Alex James. With the addition of Dave Rowntree, the band began playing as "Seymour". Before long the band was signed to Food Records and changed its name to Blur.

In 1997, Albarn branched out into acting, appearing in the British film Face.

As of 2006 Blur has released seven full-length albums, five of which went to #1 in the United Kingdom and all of which reached the top 15. Albarn has written the lyrics to nearly every song released by the band since their formation. He had publicly stated he was waiting for the return of Graham Coxon, who left the band prior to the release of Think Tank, to produce more Blur material; however, Coxon has refused to return, and Albarn stated in September 2005 that he will play guitar on the next Blur record. Albarn Quoted, "If Coxon won't return then I'll be playing guitar but it'll just be fast punk songs. Why don't I get another guitarist? Because there's none better than Coxon." See the "Next album" section of the main Blur article for more information.

Gorillaz and Demon Days have done well in both the United States and the United Kingdom, as well as their respective hit singles "Clint Eastwood", "Feel Good Inc.", "19-2000 ", "DARE", "Dirty Harry" and "El Mañana/Kids With Guns".

Albarn released Mali Music in 2002. As the name suggests, the album's recording sessions were done in Mali, a trip he made to support Oxfam in 2000. He has also visited Nigeria to record music with African drummer Tony Allen. Albarn says he would like to produce a Blur album in Baghdad as he "likes the Iraqi style of music".

He also released Democrazy in 2003, a collection of demos he recorded while staying in hotel rooms on the U.S. portion of Blur's tour for Think Tank.

Albarn has also appeared on other unrelated works. His song "Closet Romantic" appeared on the soundtrack for Trainspotting alongside an early Blur recording, "Sing". Fatboy Slim's 2004 release Palookaville featured Albarn's vocals on the song "Put It Back Together". Albarn provided the voiceover intro and backing vocals in the song "Time Keeps On Slipping" for the rap concept album "Deltron 3030". The album was produced by Dan the Automator, who also produced the Gorillaz debut album.

Albarn also composed the score with collaboration by Michael Nyman for the 1999 movie "Ravenous" with Guy Pearce and Robert Carlyle. It is described as "an eerie mix of symphonic orchestrations and clunky ragtime" which went arguably well with the movie's cannibalistic themes.

Albarn had a long-standing relationship with Elastica frontwoman Justine Frischmann. His involvement with her profoundly influenced his songwriting in Blur in the late 1990s. "Beetlebum," the opening track and chart-topping hit single from Blur, is said to be about Frischmann's heroin addiction. 13, Blur's sixth album, presents strong overtones brought about by their break-up. He now lives in Notting Hill, London with artist Suzi Winstanley and their daughter Missy who was born in 1999.

Albarn is openly anti-war and has spoken out against wars in Afghanistan and Iraq. In 2002 he took out full-page advertisements in the NME challenging the need for war, along with Robert Del Naja of Massive Attack, which they paid for personally.

In 2005, Albarn, among others, criticized the London Live 8 concert for not featuring enough black artists; this resulted in the addition of Ms. Dynamite, Snoop Dogg, and Youssou N'Dour to the programme. Albarn said he didn't want to perform in the concert because he thought it was too "exclusive" and may have been motivated by self-gain.

In the nineties, he spent a good deal of time in Reykjavík and for a time he became something of a permanent fixture in the "Kaffibarinn", a bar/café of which he was part owner. All its regular patrons were full of stories of his drinking abilities, considered somewhat impressive even by the local Icelanders. His current relationship with the bar and the country is unknown. 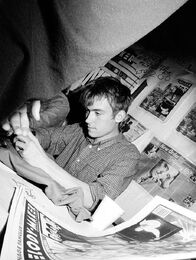 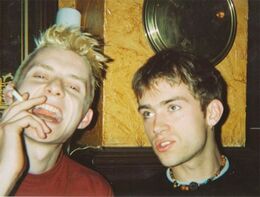 A young Albarn with Jamie Hewlett in the 90s. 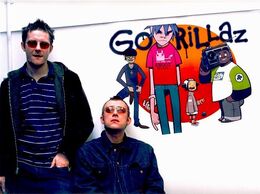 Damon Albarn and Jamie Hewlett in the early days of Gorillaz. 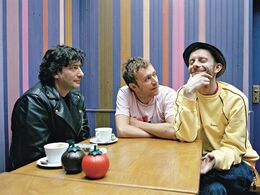 KEEPING IT (UN)REAL with Neil Gaiman. 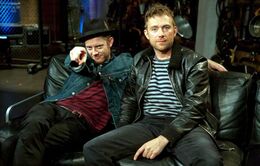 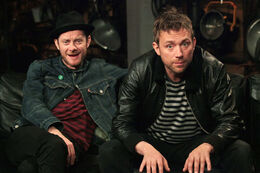 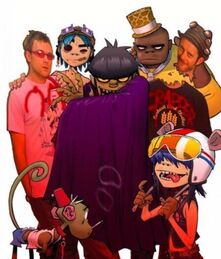 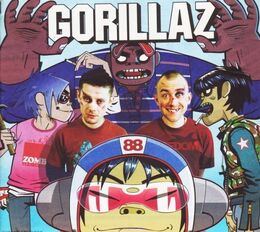 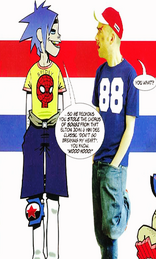 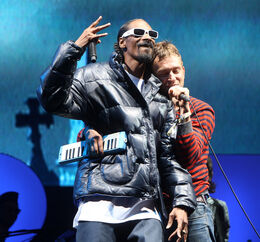 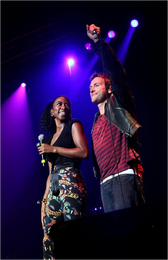 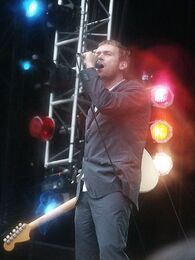 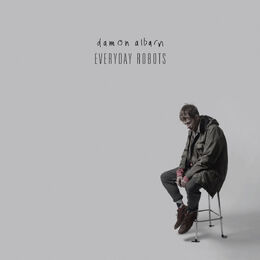 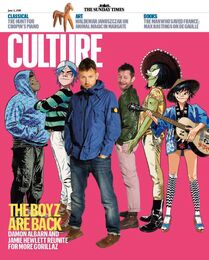 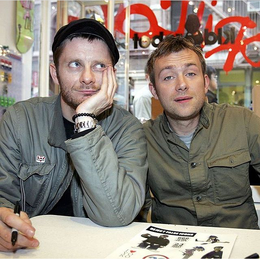 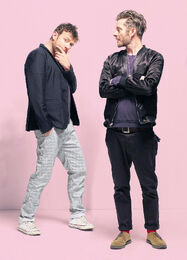 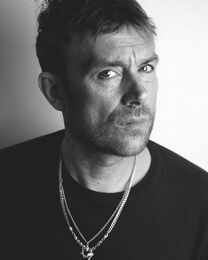 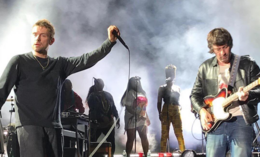 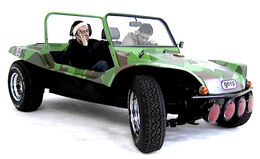 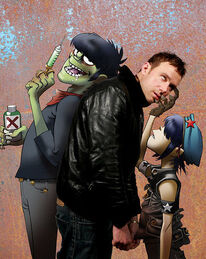 Hanging with Murdoc and cYBORG nOODLE. 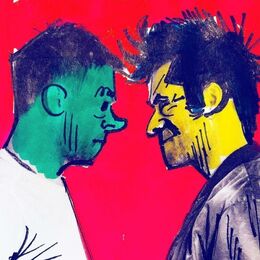 I’m yellow, he was blue…
Add a photo to this gallery
Retrieved from "https://gorillaz.fandom.com/wiki/Damon_Albarn?oldid=42721"
Community content is available under CC-BY-SA unless otherwise noted.