Gorillaz • Danger Mouse • Jason Cox • James Dring
Demon Days is the second studio album by English virtual band Gorillaz. It was released on 11 May 2005 in the United Kingdom by Parlophone and on 23 May 2005 in the United States by Virgin Records. Produced by the band, Danger Mouse, Jason Cox, and James Dring, the album features contributions from De La Soul, Neneh Cherry, Martina Topley-Bird, Roots Manuva, MF DOOM, Ike Turner, Bootie Brown, Shaun Ryder, and Dennis Hopper. As with their eponymous 2001 debut, the release of Demon Days and its respective live performances were accompanied by various multimedia, including four animated music videos; almost all visuals associated with the album were designed by Gorillaz co-creator Jamie Hewlett, under his design company Zombie Flesh Eaters.

Upon its release, Demon Days peaked at number 1 on the UK Albums Chart and number 6 on the US Billboard 200. It received universal acclaim from critics, appearing on various publications' lists of the best albums of 2005 and of the 2000s. It was later certified 6x platinum by the BPI and 2x platinum by the RIAA, and has sold over 8 million copies worldwide. Four singles were released from the album: "Feel Good Inc.", "DARE", "Dirty Harry", and "El Mañana" / "Kids With Guns".

Recorded on-off throughout 2004 and released over four years after its predecessor, 'Demon Days' is more expansive in both content and form than 'Gorillaz'. Universally critically acclaimed on its release (the vast majority of pro-reviewers giving it 4 or 5 stars or equivalent) and bristling with a well-chosen array of guest stars, it is a quality album from start to finish.

The album is a major departure from previous Gorillaz work on many fronts. Firstly, Damon ditches the characteristic 2-D yelp and sings in his own voice. Secondly, almost all tracks have a fully developed and contentful lyric - though the work must be taken as a whole to appreciate this. Thirdly, Damon's producer on this record is Danger Mouse of 'Grey Album' fame. This was a masterstroke that guaranteed at once plenty of publicity, access to a whole new range of guest talent (MF DOOM and Ike Turner were friends of Danger Mouse, for example) and, most importantly, the considerate ear of one of the most exciting pop Hip Hop producers in the industry.

This time the album has a definite message. Damon has said that as a whole it is meant to a depiction of a night, a journey through a night, in which each track represents a confrontation with a personal 'demon'. This theme was supposedly related to the proposed Gorillaz movie that was ditched when Jamie Hewlett could not agree on a script with the financiers. This night theme is reinforced from the beginning with the creepy minute-long 'Intro' (sampling scary bass clarinet from the 'Dawn Of The Dead' soundtrack) and its snatches of police sirens and other strange noises of the night. This sets the scene as being in the dead of night. The lyrics to many of the tracks are profoundly introspective ("Last Living Souls", "O Green World", "Every Planet We Reach Is Dead" etc), Damon questioning what is happening in his life and musing over the state of the world in the abstract. However there is just enough content in certain lyrics for us to infer what the singer takes to have cast the world into a state of darkness, what has turned everyone into zombies, ( Last LIVING souls, Every Planet We Reach Is DEAD ):- (1) desensitizing children / the innocent, 'arming' them with 'guns' (a possible reading of the punchy 'Kids With Guns' as elaborated in interview) on 'Kids With Guns', (2) The Iraq war: the lyrical content of the 'Dirty Harry rap', which is from the perspective of a soldier in the Iraq war. We are left in no doubt it is the Iraq war by the line 'The war is over so said the speaker / With the flight suit on' (President Bush wore a flight suit to announce the end of the war). The soldier says he is the 'reason you fill up your Isuzu' [an Isuzu being a type of motorbike], i.e. the war was for oil. Here the theme of lost innocence, particularly of the youth, is reinforced. This is also reinforced by the first chorus lyric of 'Fire Coming Out Of The Monkey's Head', which tells a tale of violent invaders, and the 'little town' of the parable is singled out as the 'USA'. (3) Ecological damage to the earth. This is not dealt with explicitly but the implicit references build up. 'Fire Coming Out Of The Monkey's Head' can be taken as an eco-parable, where earth finally can take no more damage, resulting in a 'Day After Tomorrow' scenario. 'Mother earth wants us all to leave' we are told in 'Demon Days', and the singer turns his attention to the physical (and at the same time spiritual?) state of planet earth in 'O Green World'. (4) the dumbing down of mass culture in general, resulting in the veneration of 'False Icons', a message promoted by the accompanying Gorillaz press interviews and the lyrical content of 'Feel Good Inc' - the rap in particular, surely done in the voice of the powerful corporation trying to keep everyone down. What is also made clear in the lyrics, and in the structure of the album, is that all four of these problems with the state of the world are interconnected, as is their solution. A disregard for the environment is part of a general selfishness that is associated with the disregard for other people. In the midst of the darkness we can only snatch a moment of respite and dance for all we are worth (the interlude that is 'DARE') but dawn can come ('Don't Get Lost In Heaven' surely represents the end of night twilight, and the start of 'Demon Days' the final track, marks the first rays of the new day sun). The lyrics as a whole, then, put forward a specific, view of human nature as objective, where true fulfillment can be found in the balance of our natural faculties, 'turning ourselves around to the sun', as the lyrics go in the final track - the avoidance of avarice, exploitation, and the like. This selfishness is also seen as a path to solipsism, a disconnection from others (this particularly brought out in the lyrics to 'Feel Good Inc', but the other introspective tracks can be seen as a meditation on this, in light of the picture of human nature that is built up elsewhere). Fairly general stuff then, but expressed in beautiful poetry - Damon is on form in his 'melancholy' mode.

Structurally, the album is designed to be listened to as a whole. The final three tracks in particular are almost theatrical in their segues into one another. However the fact that many are self-contained pop gems means that they do not jar as singles.

Musically the album bears its producers influence as strongly as the debut album had an 'Automator' flavor. The sound is close and clear, with poppy electronic beats and synths accompanying deft acoustic guitars. Once again, Damon's pop sensibilities remain to the fore, resulting in a catchy series of 3-5 minute pop songs, in essence. Not for him the expansive soundscape or the obscure electronic instrumental (on this album, at least). Therein lies one of Demon Days' triumphs - through superlative production, lyrical content and varied musical styles, the album is ambitious and expansive despite being at its heart determinedly pop. The choice if guest artists is astute. Each gives a commanding performance and even more so than on the debut, their star turns add color and texture to the narrative. Of particular note is Roots Manuva and Martina Topley-Bird's duet on 'All Alone' the former a long-courted potential Gorillaz collaborator who in the end gives a career-best-equalling performance in his determined rap, and Ms.Topley-Bird chimes in with a truly haunting other-worldly conclusion to the piece.

Planned and orchestrated without feeling overly meticulous, pop-crafted without being throwaway, and pleasingly general and poetic in lyrical content without being devoid of content, 'Demon Days' throws out the aesthetic behind the first album, replacing it with something deeper, that when all's said and done, is basically a bloody good pop record. A truly accomplished album which deserves to attain classic status. 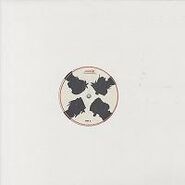 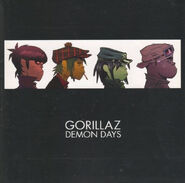 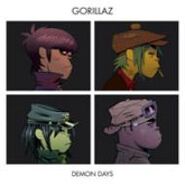 Wallpaper with original artwork on top and alternate artwork below