Dirty Harry is the fifth track and third single on Gorillaz' 2005 album, Demon Days. It was the first actual release of phase two when it appeared as a limited 12" white label vinyl promo with no band name or record label logo (catalog number 'KONG01') in January 2005.

Initial copies were released in the UK but by early February plenty had made their way over to the US.

The white label did not bear the name "Gorillaz" or the name of any of their record labels. The track was later selected to be the third single from Demon Days and got a full commercial release in the UK / Europe, and Japan. The extra tracks on the release were this time quite disappointing in that most dedicated fans already had all but two of the tracks across the formats, having obtained them from promos, imports and radio broadcasts, etc.

An early version of what would become "Dirty Harry" appeared on Damon Albarn's 2003 solo release "Democrazy" under the title "I Need a Gun". 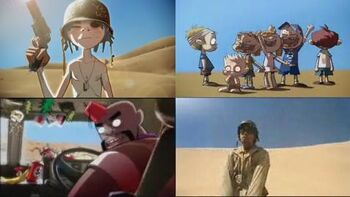 The video was first released on October 25, 2005 to subscribers of the Gorillaz website mailing list. Like the video for "Clint Eastwood", the video for "Dirty Harry" references the film of the same name. "Dirty Harry" is one of the few Gorillaz music videos to be filmed on-location, the others being "Stylo" and "DoYaThing". The band was going to use a computer animated desert, but it turned out simply flying the crew and band to the desert was cheaper and easier. Most of the video features shirtless 2-D and an animated version of the Children's Choir San Fernandez stranded in the middle of a desert, following what appears to have been a helicopter crash. The survivors keep themselves entertained with the song while awaiting the arrival of rescuers, portrayed by Noodle and Murdoc crewing a South African Defense Force Casspir mine-proof vehicle driven by Russel (who wears a Fu Manchu). The song and video feature a guest appearance by Pharcyde rapper Bootie Brown, who leaps out of the sand dune in World War II military fatigues to perform his verse of the song. In the end of the video the Gorillaz, the children and Bootie Brown depart the crash site in the military vehicle, which breaks down meters away. The themes in the single, as well as the themes in the entire album are all based on Damon Albarn's observations on the state that the world is in today. The helmet which appears on the single cover and the poster for the video, seen in the cinema section of the Gorillaz website, is reminiscent of the Full Metal Jacket film poster.

Bootie Brown:
In my backpack
I got my act right
In case you act quite difficult
And yo is so weaking'
With anger and discontent
Some are seeking and in search of like Nimoy

Chill with your old lady at the tilt
I got a ninety days digit
And I'm filled with guilt
From things that I've seen
Your water's from a bottle
Mine's from a canteen
At night I hear the shots
Ring so I'm a light sleeper
The cost of life,
It seems to get cheaper
Out in the desert
With my street sweeper
The war is over
So said the speaker with the flight suit on
Maybe to him I'm just a pawn
So he can advance
Remember when I used to dance
Man, all I want to do is dance

Choir:
I need a gun to keep myself among 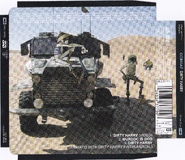 Back cover for the DVD release of the single.

Full front cover for the DVD release of the single.

Back cover for the 3 track CD release of the single.

Full front cover for the 3 track CD release of the single.

Full front cover for the 2 track CD release of the single.
Community content is available under CC-BY-SA unless otherwise noted.
Advertisement