"Feel Good Inc." charted high in most European countries (including an at-the-time career best of #2 in England, accompanied by a chart run to rival Clint Eastwood's 4 years before). In the US, aided by an iPod commercial featuring the song, and presence on the latest successful "Now" compilation, "Feel Good Inc." took Gorillaz to a whole new level - the track peaked just outside the top 10 in the Billboard Top 100, and it was also top of the Modern Rock charts for a 3 week spell.

In the UK, due to a loophole in the chart rules, "Feel Good Inc." was able to enter the charts before its official release because the record company released 300 copies of the 7-inch single format, meaning that legal downloads would count towards a chart placing for the single (this was because, according to UK chart rules at that time, download sales contributed to chart placings, but only if a physical format was also available).

A total of 4 new and original songs were available across formats, although "Murdoc is God" was only included on the Japanese CD. The feel of the B-sides was more free and experimental than that of those that had appeared on 'Demon Days' - showcasing another side to the Gorillaz sound.

"Feel Good Inc." makes an appearance in Dance Dance Revolution Hottest Party 3 on Wii, Sing Star Pop! on PlayStation 2 and Grand Theft Auto 5 on Xbox One, Playstation 4 and PC Versions, Guitar Hero 5 on Xbox 360, the 2006 movie Alex Rider: Operation Stormbreaker, and was part of Weird Al Yankovic's "Polkarama". It was also one of the songs covered by Kidz Bop for the ninth album, and the only Gorillaz song covered by the group, although it was controversial among fans.

City's breaking down on a camel's back
They just have to go 'cause they don't know whack
So while you fill the streets
It's appealing to see
You won't get out the county 'cause you're damned and free
You got a new horizon it's ephemeral style
A melancholy town where we never smile
And all I wanna hear is the message beep
My dreams they've got her kissin' 'cause I don't get sleep, no

Laughing gas, these hazmats
Fast cats, lining them up like ass cracks
Play these ponies at the track
It's my chocolate attack
Shit, I'm stepping in the heart of this here
(Yeah)
Care bear rappin' in harder this year
(Yeah)

Watch me as I gravitate hahahahahaaa

So don't stop get it, get it
Until you're jet ahead
Watch the way I navigate hahahahahaaa

Don't stop get it, get it
Be proud your captain's in it
Steady, watch me navigate
Hahahahahaaa! (x2) 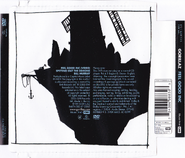 Back cover art for the DVD release.

Inside cover art for the DVD release.