The Flying Windmill Island, was a windmill featured in Phase two as probably one of the key elements of the phase, as seen in the Feel Good Inc. video, El Mañana video, Spitting Out The Demons visuals and in the On The Island G-Bite. Noodle is seen riding it and playing her acoustic guitar. It was stated to be "the last place where the greatest guitar player was, before death" by Murdoc Niccals.

There are many stories of why the windmill island was made.

The Gorillaz flying windmill was first made during the making of the Feel Good Inc. Video, both Noodle and director Jamie Hewlett agreed that it captured the sense and meaning of the song. The Windmill was actually made of wood blanks put together to support its flight in the air. In the Feel Good Inc. video, the windmill island is seen in choruses as 2-D sings "Windmill windmill for the land". Noodle can be seen playing her acoustic guitar, on the second chorus, sitting on the windmill, mouthing the lyrics. The windmill and Noodle's presence in the video was to project the image that 2-D is trapped in the Feel Good Inc. tower, and that Noodle is free. The windmill can be seen being chased by unarmored helicopters, in the first chorus and then when it disappears at the end of the video. According to Murdoc someone had graffitied on the side of the windmill so only specific shots could be used. The windmill could then be seen outside Kong Studios on Gorillaz.com. Then after having released the video for DARE , Dirty Harry and Kids With Guns, it was time for Gorillaz to leave the scene again in 2006. Almost a year prior, Gorillaz had embarked on a virtual tour called the Demon Detour. Where they had been attacked by gun shots, the band soon found it was Jimmy Manson. Jimmy Manson had auditioned in the early days of Gorillaz but got put down after Noodle joined. Somehow he became the bands label state side during the tour. Jimmy had since held grudges for the band, and would soon approach Murdoc with a plan to kill off Gorillaz and to cash in their success. Murdoc and Jimmy's plan was to bring back the windmill island and helicopters from the Feel Good Inc video and Noodle was to be killed during the shoot and the band would be too distracted about the fake bullets coming from the helicopters. When Murdoc told the band about his plan for the new El Mañana video the band felt sceptical but eventually caved in. Gorillaz then bought back the windmill island from storage one last time. In the video, Noodle can be seen sitting peacefully before a bunch of armoured helicopters came out of nowhere and started shooting the island. The windmill eventually plunges into a cannon before taking one more hit from the helicopters blowing it up, fortunately Noodle managed an escape, by jumping ping off the windmill in time. Then in 2006 the windmill could be seen flying away from Kong Studios, on Gorillaz.com, to an unknown location. It transpires that Murdoc betrayed Jimmy locking him in tower, with no weapons making him illegible to kill Noodle. The helicopters then transpired to be The Black Clouds.

It started in a Rolling Stone article that Mr. Kyuzo, Noodle's mentor and creator, was caught sending Noodle to Kong Studios and was told by his bosses that if he didn't kill her then they would kill him (see the article on Noodle to see why he sent her to Kong Studios). So, to save his life, he met with the Gorillaz and told them that Noodle should be on a Flying Windmill Island for the "Feel Good Inc." video. They agreed and so she was put there. This was the start of his plan. He gave another idea to put helicopters to shoot the windmill island down, but Murdoc rejected the idea. Soon, when the band needed an idea for the "El Mañana" video, Mr. Kyuzo stepped up and gave the idea to make Noodle look like she died in a crash. Eventually, Murdoc agreed on his idea. He also took Kyuzo's idea for the pirate helicopters. Kyuzo told Murdoc that she will need a parachute to jump off at the end to survive. When Noodle put down the parachute in her room to get ready for the video, Kyuzo snuck in and rigged the parachute to back-fire. Somehow, she actually survived by jumping off and got a big bruise on her eye, which she uses a cat mask to cover in Phase 3. After the El Mañana Video the windmill could be seen leaving Kong Studios[1] in 2006 and later could be seen outside Kong Studios in the distance.

The island also made an appearance in the end of the DoYaThing music video, in a partially repaired state. The windmill is yet to make another appearance.

The Effect on The Band

In the song "Feel Good Inc." by Gorillaz, it sings "Windmill Windmill, For the land, Turn forever, Hand in Hand", which was an added lyric because the windmill island appeared in the video, and it wasn't included in the original lyrics. The incident from the "El Manaña" video took a huge toll on the band because they lost their lead guitarist, Noodle. It also made Noodle want to temporarily seek revenge on Murdoc and Mr. Kyuzo. 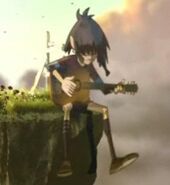 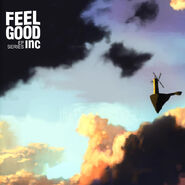 On the cover of Feel Good Inc.