This article is a real-world history of the group Gorillaz. For the band's "fictional history" see Backstory. For their self-titled debut album, see Gorillaz (album).

The band was created by Damon Albarn from the Britpop band Blur, and Jamie Hewlett, the co-creator of the comic book Tank Girl. Their style is known for its variety and genre blending, with influences from many different types of music, but most notably from hip-hop, dub-reggae, electro, and pop. More recently, they have also obtained influences from R&B, soul, and Chicago house music. Damon Albarn had first met Jamie Hewlett when Blur's guitarist, Graham Coxon, had asked Hewlett to give an interview with Blur, in the 1990s and the two originally formed a hatred for each other, (Albarn stated: "I was jealous of his personality".) but it wasn't too long until the two became roommates in Trellick Tower. Damon Albarn wanted to distance himself from Blur's Britpop days and was looking for a solo career so he could experiment with other genres, but wasn't sure where to start, meanwhile Jamie Hewlett was growing tired of his Tank Girl series after the movie became a critically panned box office bomb and had no interest in continuing. The two ended up throwing several celebrity parties in their flat at Trellick Tower (which were often packed), and it was here that Gorillaz would emerge.

Gorillaz, unlike other fictional bands, were not created as a parody of a particular genre (GWAR, Dethklok), marketed to young children (Alvin and The Chipmunks), depictions of the people behind the band (Prozzak), or created for television (The Archies, Josie and The Pussycats, Dr. Teeth and The Electric Mayhem). Instead, Gorillaz were originally created to be explored through the internet (a new medium at the time), and were intended for an older audience than the cartoon bands before them, while the quality of their actual musical output was usually more of an attraction to their fans than their existence as cartoon characters. The bands that influence their music range from Massive Attack and The Specials, to De La Soul and A Tribe Called Quest, to Daft Punk and Beck, while they are visually inspired by Hanna Barbera, Looney Tunes, Mad Magazine, Heavy Metal, 2000 AD, and many classic horror and cyberpunk movies. They have said that The Simpsons was a big influence on Gorillaz for “the way that they invade popular culture and comment on it in a pretty organic way”. Today, Albarn says that Gorillaz was developed out of “a very morbid obsession with the end of the world”. 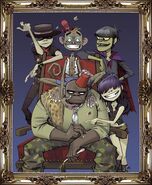