Around 2002 company Art Asylum announced plans to create the first ever official Gorillaz figures. Large plans were made for the Gorillaz license; each figure was rotocast vinyl, roughly in the 10" scale, came in an elaborate box-style package,[1] and had individual accessories, such as pets and instruments. First displayed at Toy Fair 2002, the lineup included 2-D, Murdoc, Russel, Noodle, and a Zombie Gorilla.[2]

This series of toys, however, never saw the light of day. The first sign was the cancellation of the Zombie Gorilla, made evident by the fact he was not to be included in the shipment listings.[3] Sooner than later, it was apparent that the rest of the line had been cancelled, as well.[4]

In 2005, KidRobot eventually created an extremely similar array of figures. Though practically parallels to Art Asylum's original collection, minor differences reveal them to be ever so slightly different; either KidRobot had access to the original figures as reference points for the new sculpts, or modified the initial sculpts themselves to suit what enhancements they felt were necessary.

KidRobot released two versions of the Phase One set; Black[5] and Red[6] . Each of the characters came with a sticker sheet. They also produced a DARE edition of Noodle.

An unknown company was going to offer a Stylo car model for G-Club Subscribers, but the project was ultimately cancelled.

In 2019 company Superplastic announced they would be collaborating with Gorillaz to make brand new figures. In the next years a lot of new Gorillaz Superplastic Figures were made. 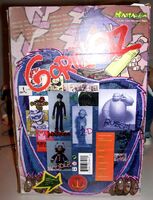 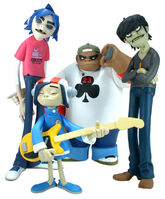 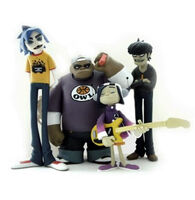 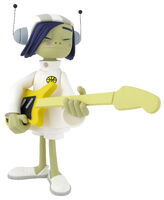 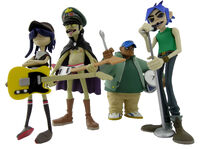 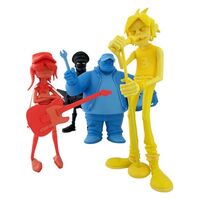