The West London Kong Studios (formerly known as Studio 13) is the current studio of Gorillaz.

After the destruction of Plastic Beach and being imprisoned by EMI over a contract dispute, Murdoc agreed to move into a new home/studio located in West London, known as Studio 13, where the band would reunite and begin production of a new Gorillaz record, Humanz.[1]

For the next few years Gorillaz lived mainly in Studio 13, sometimes moving temporarly to other places, like Spirit House or Tokyo HQ.

After recording Humanz and The Now Now at Studio 13, the band decided to rename their studio in preparation for their next project Song Machine. While remaining in West London, Studio 13 was renamed after the band's original Kong Studios in Essex.

In May of 2021, a demonic sinkhole opened beneath the New Kong Studios, leaving it temporarily inoperable. During this time, the band went on a road trip in Murdoc's Winnebago.

Kong’s top floor studio appears in the music videos for Momentary Bliss and Pac-Man, where the band can be seen collaborating with their featured guests. It has it's own kitchen and bathroom. During early months of the pandemic Russel spent his time in here, watching TV and experimenting with various food related challenges.

Rooftop Garden is a plant filled balcony on the top floor of Kong Studios. Noodle broadcasted her episode of Song Machine Radio from the Kong rooftop’s garden.

Garage is one of the rooms in New Kong Studios. It houses the band's current vechicles, such as Pagan, Winnebago and Fonda.

Panic Room, also known as Chamber 37, is one of the rooms in New Kong Studios. Russel broadcasted his episode of Song Machine Radio from Kong’s Panic Room and planned to redecorate it as his new year's resolution.

Storage Room is a room in the New Kong Studios where the band stores their musical equipment. It's also the room where Murdoc used to sleep before he moved full time to the basement to work on his secret project.

Kong’s upstairs kitchen appears in the music videos for Momentary Bliss and Désolé. It's one of the few kitchens in the New Kong Studios, with others being on the top floor and in the basement.

2-D broadcasted his episode of Song Machine Radio from the downstairs store cupboard.

Downstairs Toilet is located next to store cupboard in the New Kong Studios.

Green Screen Room is a spacious room in the New Kong Studios where the band filmed The Pink Phantom music video as well as additional scenes for the Aries music video.

Murdoc spent months in Kong’s basement building his orgone accumulator as seen in the PAC-MAN music video. It's also where he broadcasted his episode of Song Machine Radio from.

Basement Studio is a spacious room located in the basement of the New Kong Studios. It's used for mixing and mastering the tracks and currently houses 2D's Haunted Pac-Man Cabinet, as seen in the PAC-MAN music video.

It's a small kitchen located in the basement of the New Kong Studios.

Giant Stage Chamber in Kong’s basement was the setting for the band’s series of virtual live shows in December 2020 as well as Murdoc’s party celebrating 2D’s 41st birthday that 2D was not invited to.

Railway is located behind the New Kong Studios. It's visible from the Roofrop Garden in the music videos for Momentary Bliss and PAC-MAN and the train can be heared in the Machine Bitez #8.

Similarly to the Original Kong Studios there's a landfill located somewhere near the New Kong Studios, as seen on the Gorillaz Almanac cover.

West London Kong’s most notable quirk is its various portals with which the band uses to travel the world and invite guests to record. After being introduced in the music video for Désolé, the portals became a recurring element through season one of Song Machine. Murdoc’s inability to properly use the portals led to jealousy, and their travels ultimately led them back to Plastic Beach, where the band would have to face the consequences of Murdoc’s maniacal actions ten years prior in the music video for The Lost Chord.

In the PAC-MAN music video Noodle goes through two unusual styles, first being animesque, and the second being Peanuts-inspired. Murdoc stated that "It’s some freaky new power. Her style mutates each time she hears a banging tune."

The Pink Phantom is a ghost haunting the West London Kong Studios. It first appeared in the music video for The Pink Phantom where Murdoc tries to catch it with a butterfly net.

Kong Studios in The Pink Phantom

Kong Studios in The Valley of the Pagans 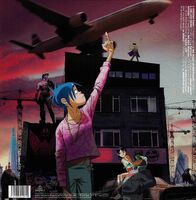 Kong Studios on the back cover of the Song Machine, Season One: Strange Timez 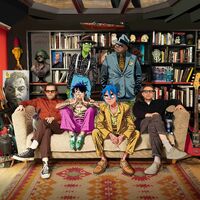 2-D and slowthai in the rooftop garden

Murdoc in the Upstairs Kitchen