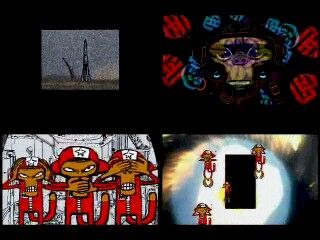 The video has two different beginnings, depending on the version. In one a 3d space ship is seen taking off. In the other a crowd of dignitaries that look like they're from archive footage of the Soviet Union, cheer an old-style rocket in taking off. From this point both versions are the same. The rocket is seen flying through space to a space station. Here loads of Space Monkeyz fly around. A lot of musical equipment is seen floating in orbit and the Space Monkeyz fly around this. Finally there is a 2001-esque light show in space using Gorillaz images (including Gorillaz heads of the band, and 'Apex' the duck tattoo image, etc).

There are two versions of this video. The first was the one shown on music channels, that featured on the Lil' Dub Chefin' single CD. This has the 'archive footage' beginning (see above). The second version appears on the DVD Celebrity Take Down. This also has the DVD credits overlaid on the light show at the end of the video.