He featured on the third Gorillaz album, Plastic Beach, in the song "Some Kind of Nature" doing vocals. He is also shown in a submarine in the "On Melancholy Hill" video.

In May 2013 Reed underwent a liver transplant at the Cleveland Clinic. Afterwards, on his website, Reed wrote of feeling "bigger and stronger" than ever, but on October 27, 2013, he died from liver disease (from a problem during surgery) at his home in Southampton, New York, at the age of 71.

Lou in "On Melancholy Hill". 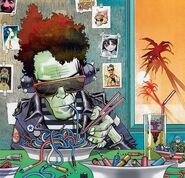