The Meanwhile EP is an extended play by English virtual band Gorillaz. It was released on 26 August 2021.

The EP was released as an homage to Notting Hill Carnival, an annual event that takes place in London in August, but got canceled in 2021 due to the COVID-19 pandemic.

The tracks from the EP where first revealed and played live on August 10, 2021, at the O2 Arena in London. 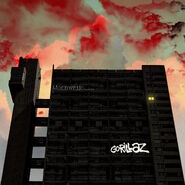