"On Melancholy Hill" is the tenth track and third single on Gorillaz' 2010 album Plastic Beach.

In 2006, an early version of the song's instrumentals were performed during an interview about Tony Allen with The Good, The Bad & The Queen, which means that "On Melancholy Hill" was either originally for The Good, the Bad & the Queen or was recycled from a B-side that was produced between Gorillaz' Phase 2 and 3.[1] The Good, The Bad and The Queen member, Paul Simonon, ended up playing bass on the song, along with some of the other tracks on Plastic Beach.

Band member Murdoc Niccals stated the following about "On Melancholy Hill" in a track-by-track commentary:

"The melancholy hill - it's that feeling, that place, that you get in your soul sometimes, like someone's let your tires down. It's nice to break up the album with something a little lighter. It's good to have something that's a genuine pop moment on every album. And this is one of those."

A huge ocean liner (the M. Harriet), is under attack by two planes. A ship attendant finds Noodle in her room, offering to escort her to the lifeboats, but she opens a gun briefcase and walks down the hall past the attendant with a Thompson submachine gun. The song begins with Noodle opening fire at the two oncoming planes that are attacking the ship. She manages to shoot one plane down but does not have enough time to shoot the other. The other plane drops a bomb on the ship. As the ship sinks, Noodle survives and climbs into a lifeboat with only her guitar and some supplies.

Later on, a gigantic version of drummer Russel Hobbs lifts out of the water underneath Noodle's lifeboat. Some believe that Russel's massive size is due to pollution causing radioactivity on the long swim he had when going to Plastic Beach. The rest of the video shows Murdoc, 2-D, and Cyborg Noodle traveling through the deep ocean with a fleet of submarines, crewed by all of the collaborators that helped make the album (e.g. De La Soul, Snoop Dogg, and Gruff Rhys). They rise to the surface, where a large manatee is sitting atop a tall plateau. Murdoc spots the Boogieman leaning over the creature and orders Cyborg Noodle to attack it. Cyborg Noodle shoots at the Boogieman but the bullets do him no harm. He grabs the manatee and dives into the ocean, sinking with it. When the fog clears, Plastic Beach can be seen.

The music video is a continuation of "Stylo" video, as they are in the same shark submarine and 2-D is still wearing his clown mask, as well as the bullet hole still present in Cyborg Noodle's head, though Murdoc is seen wearing a different shirt and a hat.

Up on melancholy hill, there's a plastic tree
Are you here with me?
Just looking out on the day of another dream
Where you can't get what you want but you can get me
So let's set out to sea, love
Cause you are my medicine, when you're close to me
When you're close to me

So call in the submarines, round the world we'll go
Does anybody know love
If we're looking out on the day, of another dream

When you're close to me

Outside look of the shark submarine.

The inside look of the shark submarine.

Noodle shooting her tommy gun at the pirate jets.

The M. Harriet is sinking after the pilots destroyed it.

Lou Reed in his submarine.

Gruff Rhys in his submarine.

Snoop Dogg in his submarine.

Paul Simonon all muscled up after Mick Jones gave him a can of spinach - a reference to Popeye the Sailor.

De La Soul in their submarine.

Cyborg Noodle is about to take aim. 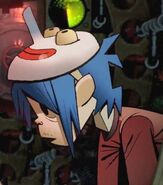