References to Gorillaz in Popular Culture

This is a List of References To Gorillaz in Popular Culture. This list will include references to Gorillaz in other works including (but not limited to) references to and appearances from Gorillaz found in TV shows, films, video games, music and other mediums.

In the Pixar documentary A Pixar Story, Gorillaz stickers from phase one can be seen on a Toy Story animator's computer.[45]

Noodle and Murdoc lookalikes in the same bar as Ms. Marvel and She-Hulk. 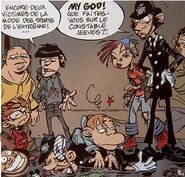