The storyboard for the canceled music video of Rhinestone Eyes.

The Boogieman then points to Murdoc and remembers a flashback in which four men that appear to be the Four Horsemen of the Apocalypse pass by a desert setting, while the Boogieman is left behind on a donkey. A mysterious man approaches him and holds his hand out as a sign of friendship. As the Boogieman stretches out his hand,the man grabs his hand and the man is revealed to be Murdoc. The scene returns to normal with the Boogieman feeling outwitted as Murdoc grins. Cyborg Noodle blows up the entrance while holding a complete arsenal of weapons, surprising all of the fellow people who collaborated on Plastic Beach as her eyes and mouth start to leak oil.

The Boogieman then summons his own army to attack Plastic Beach while Cyborg Noodle and the collaborators try to defend the island. A whale begins to bite the bottom of Plastic Beach, scaring 2-D until Russel grabs its tail and tosses it into the sky, hitting a plane. Cyborg Noodle is startled to see Russel while he opens his mouth, revealing Noodle to be inside. Noodle takes off her mask and reveals a bruise and some scars around her right eye. 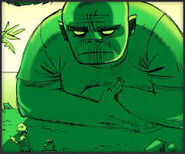