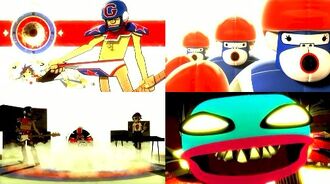 The music video for "Rock the House".

The video starts with a shot of the gate of Kong Studios, leading the camera to the window of the Evil Twins lurking out. The camera then follows Noodle on her tricycle through the hallways of the building, until she enters the doors to the room where the rest of the Gorillaz members are performing.

The other members of the band were seen playing their instruments on a futuristic game court in Kong Studios. The game consists of using your body to try to prevent balls fired from a cannon from hitting a target. The more balls that hit the target, the more points the opposing team gets. Suddenly, Del appears and starts rapping. 2-D, Murdoc and Del all play rounds of the game. Del stops all the balls with his great strength. Next up is 2-D, who tries to dodge all the balls by dancing (more notably pelvic thrusting), but still ends up getting hit and hurt. Finally Murdoc has a go, and he deflects the balls using his crotch. At first he is successful but ends up being incapacitated after too vigorous a thrust.

Damon and Jamie have said the futuristic game in the video is based on an idea in the 1969 French film 'Mister Freedom'.

Add a photo to this gallery
Retrieved from "https://gorillaz.fandom.com/wiki/Rock_The_House_(Video)?oldid=39352"
Community content is available under CC-BY-SA unless otherwise noted.