The biography has not been officially updated, therefore, do not edit it.

A hip-hop hard man from the US of A, Russel draws upon spooky spirit mates to help guide his beats. The funkyphantoms live within Russel's hunking frame and pop out every so often to provide some undead rapping. Russel himself is well adjusted, with an enviable wardrobe. Beautifully spoken. Polite to his elders. Privately educated. Proper musician. Without Russel, Gorillaz couldn't survive: he's the safety net, the linebacker, the true defender. Women love his solid safety, men his solid credentials. Multiple trainer owner. Likes to eat. 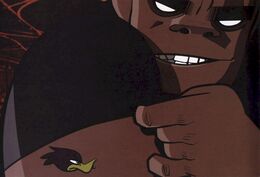 Russel's journey from his homeland has brought him closer to the heart of the American people than geographic proximity might ever have done. Through Russel's funky-phantom fuelled flow, USA, the spiritual home of hip-hop, has accepted Gorillaz deep into its bosom. The beat goes on and keeps growing like the man himself, both spiritually and physically. "The way we've been received is pure love. We've made some great videos and they've been felt. People are feeling us. We're looking forward to breaking new ground for everyone. I'm even getting used to sharing myself with the phantoms inside me!" Future projects: Russel has used his money wisely, investing in Russian Chicken farms. "The Colonel's gonna blow up, Moscow way, next year!" He also opened up the Russel Hobbs Home for Runaway Rappers, caring for homeless rhymers and renegade mixers. He famously collaborated with the United Nations on the EP: "War's A Bum Rap (Stars From Around the Globe)." Russel has also become an avid naturist.

"He's the hip hop hardman. Dark, quiet and thoughtful. He hates Murdoc and is constantly putting him in his place."

Full name: Russel Hobbs. The 'thoughtful one', but with a side that can party hard. Softly and eloquently spoken in interviews (thanks to his private education). Known to shout out to the crowd to get them going at many concerts, often taking a kind of MC role. Protective of Noodle, from the potentially corrupting influences around her, and also 2D (broke Murdoc's nose when he had sex with 2D's then-girlfriend, Paula), also has intervened to save 2D from Murdoc on the Official Gorillaz Forums. Heavily into Hip Hop in particular. The funky phantoms in his body (it was explained in the first official Gorillaz biography) are the spirits of his friends in his Hip Hop crew that were killed in a drive-by shooting of which Russel is the only survivor. Prior to this posession he was posessed by demons for many years before having them exorcised. The spirits that have contributed to Gorillaz records so far are Del Tha Funkee Homosapien and Phi Life Cypher (it is unclear whether other rappers on Gorillaz records are actually spirits or regular collaborators). Del was exorcised in late 2003 and it took a year for Russel to fully recover, and in some ways he would never be the same. Quite why Del was exorcised and whether any of Russel's other undead buddies remain is unclear. Murdoc happened upon Russel in a chance encounter in a Soho rap record store; Murdoc kidnapped Russel prior to asking if he wanted to join the band. In concert he is the Gorillaz drummer, and also supplies the funky phantoms.