Quincy Matthew Hanley (b. October 26, 1986), better known as ScHoolboy Q, is an American rapper and songwriter.

ScHoolboy Q provided vocals for the track PAC-MAN from Gorillaz' seventh studio album Song Machine, Season One: Strange Timez, appeared in it's music video and accompanying it Machine Bite. He later made an appearance on Song Machine Live thanks to pre-recorded footage.

In 2009, Hanley signed to Carson-based independent record label Top Dawg Entertainment (TDE). He is a member of the hip-hop supergroup Black Hippy, alongside rappers Ab-Soul, Jay Rock, and Kendrick Lamar. In 2010 he toured and was working with the rest of Black Hippy and worked on his own project titled Setbacks. It was released on January 11, 2011 to critical acclaim. Over the years ScHoolboy collaborated with A$AP Rocky, BJ the Chicago Kid, Mike Will Made It and Travis Scott among others. He released five studio albums in total, Setbacks, Habits & Contradictions, Oxymoron, Blank Face LP and Crash Talk. 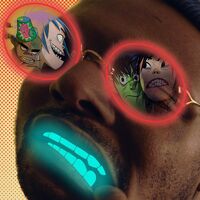