Black
Sebastian Jacob Niccals (or Jacob Sebastian Niccals, depending on who's asking) is the father of Murdoc Niccals and Hannibal Niccals.

In the Gorillaz autobiography, "Rise of the Ogre", he is described as a 'Notorious Booze Hound', 'Gambler', 'Womanizer', a 'Ne'er-do-well' and 'a man whose collection of dubious vices would put Bill Sikes to shame' and was rumoured to have fathered many children in the land of Stoke-on-Trent. It was also said that he always avoided work, no matter what the cost.

He first discovered Murdoc as a baby abandoned on his doorstep on a night while arriving home from the pub. Over the years, he would often force Murdoc into taking part in talent contests in order to make some fast money.

He has an appearance inside the Winnebago on a picture frame in Gorillaz - MTV Cribs, with his name censored out.

Sebastian established The White Light Brewery Co. in 1955, the same brand of beer used in the visual for the eleventh Demon Days track White Light. The brand is the only Beer endorsed by Gorillaz. 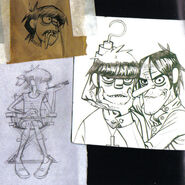 A sketch that portays Jacob Niccals with a hook where his right hand should be.