The Grim Reaper is one of the antagonists of the Gorillaz. He is a member of a group of a gang who wore red hooded jackets (apart form him who wore black) and caused Russel to be haunted by his image for the rest of his life.

Not much is known about him as he hasn't physically appeared in any Gorillaz materials. However, he was involved with the shooting outside a 7-Eleven Store that killed Russel's friends. After the shooting, the spirits of Russel's friends came to reside in his body, the most prominent being Russel's best friend Del. 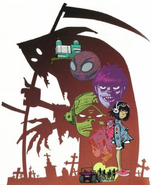 Add a photo to this gallery
Retrieved from "https://gorillaz.fandom.com/wiki/The_Grim_Reaper?oldid=32514"
Community content is available under CC-BY-SA unless otherwise noted.