Before being a Gorillaz track, the song was released as a Blur demo called "I Got The Law" from their album "13", in 1999.

The beginning of 2002 saw Gorillaz cultural stock in the UK still on a high with award nominations and notably the appearance at the UK BRIT awards, opening the show. To remind the public that the album was still out there, a single was required. "Tomorrow Comes Today", although released previously as the lead track on EP was chosen as there was a video readily available, and also because the original release had not made much impact so it would be new to most people. The biggest treats for the fans on the package were probably the revised Gorillaz biographies and a new original B-side, "Film Music", a mischevious title which tied in with the Gorillaz movie Damon and Jamie were talking up to any interviewer who'd listen (and, Gorillaz having conquered the world by this point, these were not few in number). As this is the only original B-Side not compiled on any version of G-Sides, the inclusion of 'Film Music' also makes this release more desirable for collectors.

2-D claims a lot of the song was just whatever came into his head, then they stuck it together with another bit that sounded good. It's been described by him as a "French film that's been blurred".

Murdoc simply described it as "noir".

During the track, the spirit of Sir Emerick Khong can be heard moaning. Murdoc says it is the ghost's dehydrated soul clutching his head, looking for painkillers.

The whistling towards the end was actually Murdoc in the corridor, who had gone for a "quick slash", which the mic picked up.

After they played the song back, Murdoc liked the combo of the urban imagery and the cowboy-style whistling and thought it sounded "Morricone", like a Wild West London soundtrack. 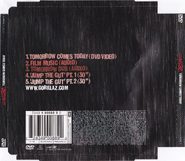 Back cover art for the DVD release.

Menu screen for the DVD release of the single.