The Tomorrow Comes Today EP is an extended play by Gorillaz, released on 27 November 2000. The EP is notable for being the band's first ever commercial release.

The UK issue of the Tomorrow Comes Today EP, released November 27, 2000, was the first commercial Gorillaz release. Having 4 tracks, it was ineligible for the UK singles charts (which then had a '3 original track' limit) and was thus classified an EP. The EP had virtually no promotion at the time of release. The three B-sides (unheard at time of release) and the CD-ROM video of 'Tomorrow Comes Today' rounded off an excellent package showing many sides of this new act. The EP was also released in Europe, the US and in Brazil as a promo CD. 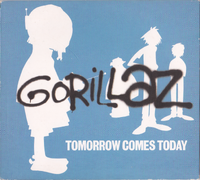 Inside cover for the EP.

Front and back cover for the EP.