Murdoc's Winnebago (also known as Murdoc's Wagon, The Winne, Murdoc's Love Shack on Wheels, The Pay Off (or Payoff), or simply The Winnebago) is an old RV which serves as Murdoc's own personal vehicle. In Phases 1 and 2, it also served as his home (despite being parked inside of his own studio.)

At some point during late Phase 1 and between Phase 2 (early 2001), the Winnebago was stolen by Murdoc's rival, Dr. Wurzel. While the Winnebago was missing, Dr. Wurzel started a Geocities page where he would post photos of his many adventures with Murdoc's mobile home. During the doctor's possession of the Winnebago, he leaked the (at the time unreleased) first ever track by the band, "Ghost Train"; which would later be added to the G-Sides. At some point in late 2001, Murdoc (or the authorities) apprehended the crazed doctor and returned the Winnebago to its rightful home in the Kong Studios Carpark . After the incident, the dispute was settled in court and never spoken of again.

During Phase 2, the 1984 Chieftain Winnebago Motorhome continued to sit in its parking spot in the studio carpark. The Winnebago made its last major appearance during the MTV Cribs Kong Studios tour when Murdoc attempted to seduce the camera crew.

As of Phase 4, the Winnebago appeared to have been stolen once again. A missing poster for the lost RV can be seen hanging in the garage of the Spirit House app. The poster indicates that a reward of £666,666 is being offered for the vehicle's return, and that it was last seen outside The Plume of Feathers, a pub in the town of Crondall.

In Phase 6 the Winnebago reappears, seemingly now with the ability to travel through space (as seen in the music video for Strange Timez). When a demonic sinkhole temporarily consumed Kong Studios, the band went on a road trip for a few weeks in the Winnebago during the Gorillaz x Fred Perry collaboration.

The Winnebago in the Carpark during Phase 1

The washroom in Phase 2

The Space Winnebago in Phase 6 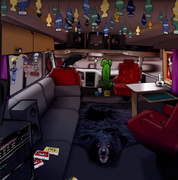 Full view of the front end during phase 2