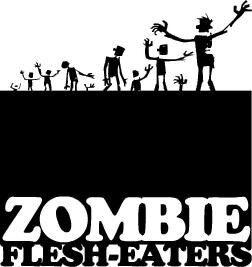 Zombie Flesh Eaters was the former creative agency and design team created by Jamie Hewlett made specifically for Gorillaz content. They were a part of Gorillaz from 2000 until its disbanding in 2010.

Zombie Flesh Eaters was founded in 2000 (they share their name with a 1979 Lucio Fulci zombie film). Initially Jamie had recruited just Matt Watkins but it soon became clear the project would need more hands and ideas, and Watkins got his brother Tim Watkins in to work on the technical aspects of the website. Kate McLauchlin was working in the same studio as Lucy McLauchlin, Matt's girlfriend at the time, so they brought her in as a graphic designer. Later, even more personnel were brought in. Gorillaz was the primary focus of the group from 2000-2002, but after the release of the self-titled album they worked on a variety of other projects. These projects include interactive menus for a John Lennon DVD and promotional work for Freq Nasty, an artist on the Skint label. The company has had little projects since, and their role in the Gorillaz project has declined over the years. In Christmas 2010, Zombie Flesh Eaters shut down, as Jamie Hewlett moved to France during his 4 year falling out with Damon Albarn. Since Gorillaz' return in 2017, Hewlett now does Gorillaz' design work himself or with the assistance from Stars Redmond, Siobhan Battye, Eleven Management or LuckyMe Studios.